A testament of my dumb-dumbness.

Short version: First and last pistons on the top manual wasn’t being read by the computer. They were programmed different from the rest of the pistons and thus had to be reprogrammed so that the the computer can read the signals from it, and be properly assigned in Hauptwerk.

So in my last post, I was really ecstatic that everything works! Until I figured out that the first and last Pistons didn’t. These are the Pistons normally assigned to “set” and “cancel” on a normal organ console. Pretty important Pistons!!

Bothered Darryl from Classic Midi Works a lot. I thought maybe it was a hardware issue. But was told it wasn’t and that I just need to reprogram them. Well, regrettably, I had my doubts. Little old me with little to no experience, what do I know? Silly me. All I know was that when I tested the MIDI signals coming out into the computer, all the notes and other Pistons sent, except those 2. Also, there’s a green light that flashes every time something is depressed, meaning there’s signal flow, and it doesn’t light up when I pressed those 2 Pistons in question.

Anyways, I still thought in the back of my mind that it was a hardware problem and that maybe I would just have to set some other Pistons as “cancel”….. Until I messed around with the Pistons and accidentally reset the “middle C” to some random note, I don’t know which because I didn’t do it on purpose. Apparently, I used the “set” piston to transpose the entire keyboard. So now I know they work!! And just need to be reprogrammed.

The program used to reprogram keyboards can be found here. (You just pick the one for your model) So I download the version for my keyboards and ran it:

Then tried to load the settings from the CMK, I didn’t have a previously saved CMK config since I’ve never done it before so it only makes sense…

I was very confused when this screen showed up: 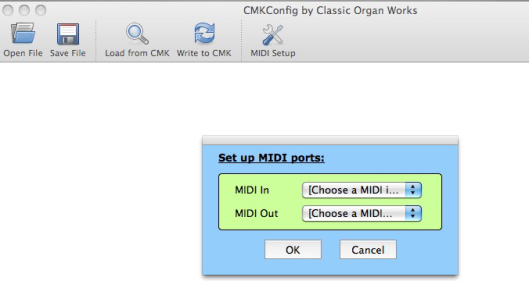 I blindly chose stuff, and l obviously, it was stuck on the screen that said “testing cabling set-up…”. 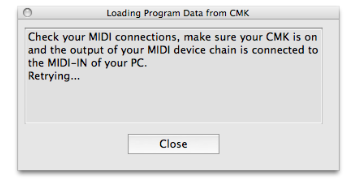 Spent all day at work thinking about it, and bothering Mr. Darryl (again), until he very helpfully said, “Ahh. You need a MIDI loop.” Thought some more, (he wasn’t around much after he said that haha, so didn’t really explain how one does a MIDI loop). Probably a good thing, turns out it’s probably the simplest thing ever. You just have to route BOTH the MIDI In AND out to the computer, thus creating a loop. (Duh). All I had to do was take the other end of my MIO iconnectivity MIDI-USB interface and stick it into the MIDI in port of my top manual. Also, looking at the error message now, it all makes sense.

From here it was a matter of assigning the Pistons that haven’t been shaded pink. (Right click piston in the program to assign).

Basically, you want the set button to be the Ahlborn set button. That will make it so that it’s a press and hold. ~Darryl from Classic MIDI Works

At this point, I’m pretty sure everything is working the way it’s supposed to.

Unplug the MIDI cable from the MIDI in of the keyboard that had been put in to create the loop, that way the signals won’t be perpetually looped and cause problems in HAUPTWERK.

My room mate can attest to the fact that I threw my hands up into the air and actually screamed that when I successfully assigned the “set” piston in the Hauptwerk program. She was in the room.

😜 thanks for reading! This blog post kind of affirms the fact that I can be a total dumb dumb.