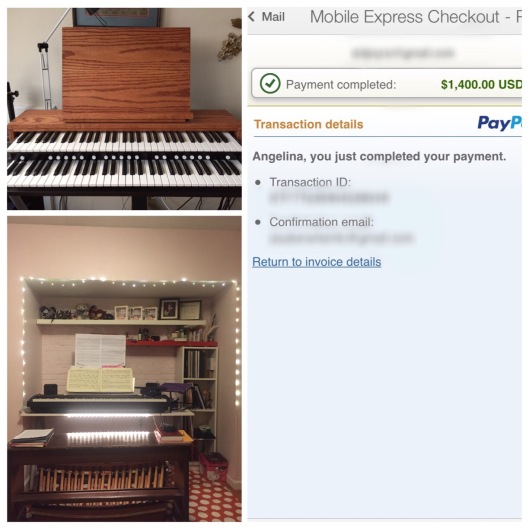 Just made the biggest purchase of my life! Keyboards from Classic Midi Works; with a touch that imitates that of a real organ (was told it compares well to tracker organs), to replace/add to the Yamaha P95 weighted 88 keys keyboard (purchased ages ago from Guitar Center) that I’ve been using as a midi controller for my Hauptwerk organ.

I’m so very excited about getting these!! For one, I’ll finally have more than one manual to practice on. Even though I had a semi-weighted Casio that I planned on using as a second manual, I never got around to hooking it up simply because I didn’t have a good way of stacking it on top of my YAMAHA, which comes with a good music rack that I’ve been using for my music. The music rack that will come with these new keyboards definitely looks too small. I’ll probably be stacking my YAMAHA right on top, it looks like it’s sturdy enough.

I’ve been wanting to get keyboards from Classic Midi Works for a really long time now. And for months, I’ve been in touch with Daryl who works there. He’s been really helpful, and answered all kinds of questions that I had. I, in turn, kept him appraised of my progress in saving up for the keyboards. When I told him that I had enough for a single one, he gave me the news that Classic Midi had new upgraded ones, and that he had a buyer in Utah who had a pair of the older model that he would like to sell before upgrading. He gave me Sidney’s contact information and the ball started rolling from there!

These keyboards come without keycheeks, and I’m hoping maybe someone will be kind enough to offer me help in making some! 😜Any volunteers?? HAHAA. One of these will be pistonless, while the other one has the “nice” Pistons.

I feel really blessed. Everyone that I’ve come across in this project had been really kind and helpful. I wouldn’t have gotten this far without your help! Thank you!

Also… Might sound silly but I’ve never spent this much in one go, EVER. Sure, there’s school, but that was mostly paid for by loans and didn’t feel like my own money; I didn’t work for that money, even though I have to pay that back. There’s my baby grand: the “certificate” of ownership has my name on it, but it was paid for in full by my parents!!

Feeling so grown up right now!! 😂

Oh and did I mention how excited I am to start playing on these? Like, beyond-this-world excited! Imagine how I’ll feel when I actually have them hooked up! I’ll be… Euphorically excited!!!!